What are the eating disorders and how it impairs oral health “There is no sincere love than the love for food.”

How do eating disorders reflect in the mouth?

A person with an eating disorder may portray a happy picture and try to escape from everyone including the doctor, family, friends due to his or her extreme emotional upheaval. But such people cannot hide anything from their Dentists. Their teeth speak much more than they eat! According to National Eating Disorder Association, 2002, 89% of people with bulimia nervosa, a type of eating disorder show signs of oral health deterioration. Another important finding from the Institute of Dental Research states that almost 28-30% of cases of bulimia nervosa are recognized first during the dental examination. Youngsters, teenagers, and women are the common victims of eating disorders and hence present with a host of dental problems too!

Anorexia nervosa is a complex psychological condition involving emotional challenges, unrealistic body shape and image issues, and an exaggerated fear of gaining or losing weight. Individuals suffering from anorexia nervosa have a tendency to maintain extremely low weight under pressure to maintain body image which is far from reality. As a result, these individuals devoid themselves of high nutritional food and required calorie intake. They literally starve themselves to maintain the perfect body weight or even exercise vigorously. At times, such individuals eat uncontrollably and then attempt to get rid of the food by vomiting. Thus, due to extreme starvation and vomiting they suffer from extreme nutritional deficiencies.

Struggle with Bulimia nervosa shows in the mouth too!

Bulimia nervosa is a serious and potentially life-threatening eating disorder characterized by intermittent periods of binge eating and self-induced or forceful vomiting called purging. Individuals suffering from bulimia often times binge to eat in less than 2 hours. Young adults and women are more susceptible to bulimia. How does Bulimia nervosa manifest in the mouth?

Acidic wearing off the enamel layer of the tooth ( tooth erosion) is the common oral feature seen due to purging. Frequent vomiting leads to the continuous flow of acidic gastric contents over the teeth. As a result, the outer layer of teeth i.e., enamel gets dissolved due to the mechanical and chemical effect of the highly acidic vomit of the person.

The upper and lower front teeth are usually affected the most. The thinning of tooth structure is more visible on the inner and biting surfaces of upper and lower teeth. The excessive erosion of the enamel layer of the tooth leads to a change in size, shape, and structure. As a result, the teeth look more uneven and crooked. Frequent eating and vomiting cycle can cause enlargement of the major salivary glands. Statistics reported 27 out of 41 patients with bulimia nervosa with a visible swelling on both sides of the face.

People suffering from bulimia tend to eat a lot of unhealthy and junk food. In addition to that due to reduced salivary flow, such people are more susceptible to ‘dental caries’. Natural hydration and hygiene of the mouth is maintained by saliva, but due to decreased saliva, the chances of dental cavities increase in people suffering from bulimia.

Advanced gum problems are commonly seen in such patients due to poor oral hygiene practices.

Trauma to the soft palate, pharynx and other parts of oral cavity is almost a universally recognized feature because such patients tend to put external objects in their mouth to induce forceful vomiting.

Cracked corners of lips coupled with fungal infections like ‘oral candidiasis’ is an early marker of poor oral health of bulimia patients.

How can your dentist help you

A good oral care is a must Different types of dental implants you should know

When it comes to replacing your missing teeth, every patient desires the best, affordable and long-lasting option!... Why are dental implants so expensive?

Dental implants have opened a new realm of treatment options for replacing the missing teeth hassle-free. As compared... 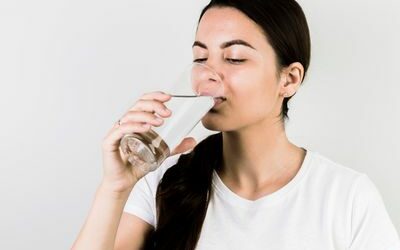 Quality of water and its effects on oral health

Water by far is the healthiest and cheapest drink available. Two-third of our body i.e., almost 60% is made up of...

Dr. Priyanka Bansode - Guest AuthorDr Priyanka Bansode has completed her BDS from the prestigious Nair Hospital & Dental College, Mumbai. She has also completed her Post Graduate Fellowship in Microdentistry from Government Dental College, Mumbai and a Post Graduate Dip. In Forensic Science & Related Laws from Mumbai University. Dr Priyanka has a vast and a diverse experience of 11 years in clinical dentistry and has maintained her private practice of 7 years in Pune. She is keenly involved in community oral health and has been part of various diagnostic dental camps, attended several National & State Dental conferences and is an active member of many social organisations. Dr Priyanka was awarded the ‘Swayam siddha Puraskar’ by the Lion’s Club, Pune in 2018 on the eve of International Women’s Day. She believes in creating an awareness on oral health through her blogs.
Open chat
Get Free & Instant Dental Checkup!!